There were significant Israeli / Jewish players in 9/11.

Take Dominik Otto Suter, Roy Barak, Motti Butbul, Paul and Sivan Kurzberg, Oded Ellner, Omer Marmari, and Yaron Shmuel for example. They worked for Urban Moving Systems, Inc. out of New Jersey. They have ties to the Israeli military, and their moving company has been alleged to have been a front for MOSSAD. Five of them were seen dressed up as Arab sheikhs, high-fiveing while filming the WTC collapse, and were arrested later that day in East Rutherford, New Jersey. In their possession were box cutters, maps of the NYC area with highlighted routes and locations, passports, and socks full of thousands of dollars. Noted Zionist Alan Dershowitz negotiated with the government on the behalf of the five men. (http://www.historycommons.org/entity.jsp?entity=urban_moving_systems)

Then there's the Bush administration. Rabbi Ari Fleischer was Bush's White House press secretary, and Rabbi Dov Zakheim was Bush's foreign policy adviser. Richard Perle was Bush's Chairman of the Defense Policy Board Advisory Committee, and was caught spying for Israel twice in 1970. Douglas Feith was Bush's Undersecretary of Defense for Policy. David Wurmser was Cheney's Middle East Adviser. Paul Wolfowitz was Bush's Deputy Secretary of Defense. That's only a partial list; for a full list, please see the link at right. (http://www.topix.com/forum/world/israel/TCH9714GE9RKCRCL2)

Then there's Larry Silverstein, the owner of the WTC. He has a personal friendship with Benjamin Netanyahu and three other of the last several Israeli Prime Ministers. He has also financed a development project in Israel's southern Negev Desert, and has contributed to Hillary Clinton's campaigns. Frank Lowy, CEO of the Westfield corporation, was a tenant in the WTC, and once served in Haganah, the communal defense organization, in Israel in the 1950s. (http://www.iamthewitness.com/haaretzdaily-Up-in-smoke.html)

Then there's Israel itself. Former and current Prime Minister Benjamin Netanyahu said that 9/11 would be good for Israel. Ephraim Ha-Levy, the director of MOSSAD during 9/11, allegedly sent six agents disguised as Arabs to meet with supposed al-Qaeda member Mohammed Atta, who believed they were sent by Osama bin Laden. (http://www.opednews.com/articles/To-What-Extent-Was-Mossad-by-Richard-Clark-110411-373.html)

Then there's Daniel M. Lewin, the billionaire CEO of internet tech company Akamai Technologies. He was a counter-terrorist operative in the Israeli Defense Forces division Sayeret Matkal. Lewin is claimed to be the first fatality of 9/11. He was allegedly sitting near or next to hijackers Mohammed Atta and Satam al-Suqami on one of the planes which flew into one of the WTC towers. According to various reports, Lewin was either shot or stabbed by one of the hijackers. A person who claims to have heard the tape of one of the black boxes recovered from the WTC site says that at least one of the planes was under the control of a hijacker before the plane took off. The wreckage of one or the planes which crashed into the towers currently sits in Hangar 17 (owned by Israeli airliner Tower Air) of the JFK airport. (http://s10.invisionfree.com/Loose_Change_Forum/ar/t16389.htm) 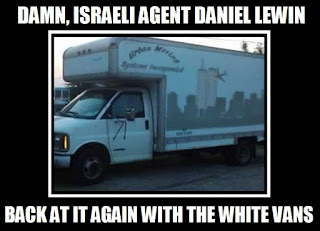