Twenty-Five Reasons Why Political Libertarians and Anarcho-Capitalists are Not Anarchists, But Should Be

1. Political libertarians legitimize the State by voting in elections; the “libertarian” politicians they vote for are Statists, Ron Paul and Gary Johnson included.

2. Murray Rothbard, Ron Paul, and Gary Johnson have all associated with the Libertarian Party since 1980; the year David Koch donated $500,000 to the party and became its candidate for vice-president. Gary Johnson continues to defend the Koch brothers.

3. Murray Rothbard, who coined the term “anarcho-capitalism”, admitted that he was not an anarchist. He wrote that “those who call us anarchists are not on firm etymological ground, and are being completely unhistorical.”

4. Murray Rothbard admitted that market-anarchist Gustave de Molinari would find the term “anarcho-capitalism” objectionable.
5. “Anarcho-capitalists” are not anarchists because the first person to describe himself as an anarchist was Pierre-Joseph Proudhon, who opposed capitalist banking practices and private property in the means of production.

7. Promoting “voluntaryism” or “individualism” in the context of political libertarianism is not anarchist; the voluntaryism of Lysander Spooner and the individualism of Max Stirner make excellent anti-capitalist anarchist substitutes for these false ideals of conservatism.

8. “Anarcho-capitalism” and political voluntaryism imply that people can voluntarily submit to workplace hierarchy and wage labor in a bourgeois-capitalist system. This is incompatible with the idea of anarchism, the lack of leadership and domination. Work is involuntary because common lands were stolen by lords for their own financial benefit, forcing peasants to sell their labor in industrializing urban centers. Read about Thomas More and territorial enclosure.

9. Property rights and the distribution of goods and services doesn't have to be controlled or dominated by capitalists in order to be considered capitalist; a system merely has to feature private property rights to qualify as capitalist.

11. The rights of private property (of exclusion and exclusive domination) do not have to be actively practiced in order to be retained; it is the State and the system of rentier capitalism that require people to demonstrate active exclusion in order to claim property as private. People would otherwise be free to make their private property into a sort of private commons, and let people live on their property – and live off of its produce – free of charge.

12. The State-controlled monopolies on licensing, permit, charter, zoning, economic rent, subsidy, and intellectual property are not natural monopolies; self-described anarchists and libertarians have no business supporting them because monopoly is the antithesis of – rather than the inevitable result of – competition, and because a perfect market is a competitive market.

13. A system of ubiquitous private property rights is simply not desirable or practical in a voluntary society featuring free and fair markets. If you don't want the State to tell you what kind of currency to use, what bank to invest your money in, which union to join at your workplace, which enterprise to buy from, or which community to live in, then you likely support various forms of social anarchism – and therefore non-exclusive forms of possession, use, and access - and you should learn about artificial markets, debt-free currency, social credit, mutual and cooperative banks, syndicates, autonomous unions, egalitarian labor-managed firms, and synthesis-anarchism (anarchy without adjectives).

14. Private property in land is Statism. The right of private property is the State-sanctioned exclusive right to practice domination over a territory, which is identical to the definition of Statism; the local monopoly on legitimate violence. It is the unquestionable, irresponsible, irresponsive right to exclusively dominate landed property – to use, abuse, and even destroy it - without being required to answer to anyone about.

15. If you have to give people exorbitant compensation to protect your property for you (or assist you in doing so), you are creating a mercenary system and contributing to the regimentation and militarization of labor. You should not have to bribe people into potentially giving their lives to protect your person and property. You have to earn your property by actively protecting it yourself; making sustainable improvements to it; refusing to call the police to help protect it; and resolving to never accept a bailout if your house collapses, your business fails, or your property becomes blighted.

16. People do not have the right to stockpile extravagant wealth or powerful weapons on their property; not without being required to pay the high costs which it would take to protect their neighbors from them (because the status of the rich as the rich makes them the most effective – and therefore the most practical and likely – targets of property crime, along with the people living near them), nor without allowing transparency from their neighbors.
If the assessment of risk were fair and mutual, the privileged rich would be expected to pay the costs necessary to protect the remainder of their wealth from the unprivileged poor. Rational companies protecting person and property would charge the most dangerous and privileged people the highest premiums to ensure the protection of their lives and the remainder of their wealth, distributing those funds to its willing customers as equal shares in the company and rights to the security it provides.

17. Planting landmines around one's property (“landmine homesteading”) and setting traps on your property is no legitimate way to earn private property, and it is especially no legitimate way to protect it while you are away and unable to defend it (absentee ownership).
This behavior is especially objectionable if you own and / or display a lot of very valuable or dangerous personal property, and your neighbors know it. This behavior creates what is called “attractive nuisance”, and you as the property owner would be liable for injury, because you would have attracted people to the property in order to lure them into a trap. Consider this idea in light of the illegal immigration issue.

18. You didn't “build that” by yourself. Although you might have had no choice but to allow the State to help you build your legitimate business, and protect you and your property and assets, the State is partially responsible for conditioning and guiding you to your current privilege and success, due to its subsidies, tax cuts, intellectual property, and other special favors. That is not debateable, but whether it means we have to “give something back” to bureaucrats, public sector union leaders, and people who are retiring, or “pay it forward” to the next generation, is debatable.

19. It is wrong to disparage or blame people for taking advantage of free, taxpayer-subsidized State assistance, such as food stamps and housing and medical assistance (including ambulance rides and trips to emergency rooms). It is not poor people's fault that the State has practically monopolized the provision of charity in some places.
Unemployed and homeless people taking advantage of all the non-public-sector charity services in your area will not necessarily have access to the same services as unemployed and homeless people in other areas of the country. Some areas are more difficult for the poor to live without State assistance than others, even if they make the most effective use of private charity possible.

20. Not all “welfare” and “redistribution” is Statist. “Welfare” simply means “well-being”. “Redistribution” of wealth can occur without the State, and in a manner consistent with “distributism”, the idea that there are not too many capitalists but too few owners (or user-accessors) of the means of production. According to Gary Chartier, radical redistribution occurs through elimination of Stte privilege, operation of freed markets, acts of solidarity, radical rectification of State theft, and radical homesteading.

21. Not all “privatization” is good. The personal element should always be emphasized over the private; do not actively privatize retirement accounts, but allow them to be personalized. Privatization should be about competition between enterprise to provide high quality goods and services ("radical privatization"), not about no-bid government contracts through special favors. Competitive markets cannot function when the distortions caused by the coercive pricing mechanisms of the State and its “private-sector” beneficiaries are present.

22. “Voluntaryist” and “individualist” libertarians and conservatives aren't the only ones who want to maximize individual choice in government. Austro-Marxist and social democrat Otto Bauer's conception of “national personal autonomy” advocates a non-territorial association of persons, with free individual accession to the political system of one's choice. Criticize collectivists based on their deviation from this viewpoint and you will be successful in defending individualism without ignoring the necessity of collectivism.

23. Communism, socialism, and cooperativism are not flawed because they are collectivist; they are flawed because they are capitalist. They employ communal, social, and cooperative selective inhibition of access to the means of production as expressions of exclusionary private property, rather than ensuring collaboratively managed equal freedom to access, use, possess, and occupy the factors of production. Gustave de Molinari wrote that “communism is an extension of monopoly”.

24. Equal access to the factors of production (land, labor, and capital) is a necessary condition for establishing a perfect and complete system of competitive markets.

25. Privilege is no less unearned because it is bestowed than because it is unchecked. Physical force against aggressors can be justified without appealing to a State; to a monopoly on legitimate violence. The right to commit legitimate violence lies in the right of the people to defend themselves against individuals who attack and threaten others, including by limiting their access to resources essential to providing for adequate sustenance, without which all physical labor is taxing, difficult, inefficient, and underproductive. 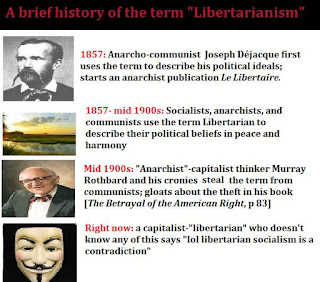