The Squirrel and the Acorn 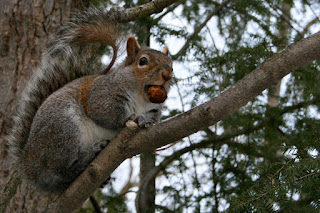 What is the telos - the essence and end purpose - of the acorn?
We may infer that the answer lays in the set of things which the acorn does.
Acorns sustain the lives of squirrels, and squirrels plant acorns, which grow into mature oak trees. The oak trees then shed their acorns, grow old and hollow, house the squirrel, provide the squirrel a place to store his acorns, and die.
Who can say which of these outcomes is the acorn's true purpose?
For when the mature oak sheds its acorns, the squirrel will be sustained. The squirrel anticipates a time when acorns will be in shortage, so he gathers them. Soon after, he confines himself to the dying oak which no longer bears fruit. The squirrel can survive in the tree until he runs out of acorns, but he must come out in the springtime to reproduce and to plant the seed of the tree that will sustain himself and his posterity.
The squirrel represents the citizen. The eating and hoarding of the acorns represents the contemplation of freedom, justice, and reason. The oak tree represents the party to the political association which protects the freedom of citizens, administers justice, and hears, understands, practices, speaks, and teaches reason.
When the party to the political association that protects the safety of men truly represents and upholds freedom, justice, and reason, the citizen will remember these things and grow closer to understanding them every time he is left alone to contemplate what he has experienced of them, and every time he is able to speak freely and share his beliefs.
But when the protective party ceases to epitomize freedom, justice, and reason, the citizen must cease contemplation and invest what little knowledge he has of these things, as well as his hope for their continuation and for the survival of himself and his posterity, in protection by a new party to the political association which has neither begun to protect, nor yet has it failed to do so.
If man clings to political associations that have become destructive of these ends, he will not be sustained. Believe though he may that the association still benefits him, what he believes to be protection and shelter have become that which oppresses and obscures him. He may only find freedom, justice, and reason once again when he abandons his protector and seeks the security of a new, lively, thriving oak tree producing fresh fruit.
The purposes of the contemplation of freedom, justice, and reason are to allow our acorn to grow into an ultimate, all-inclusive system of political associations, to sustain the mind of man through contemplation, and to utilize the benefits of wisdom, insight, and logic, in order for men to live better.
Since subjectivity to a political association should be consensual, divorce of political association should be allowed when it can be proven that one or both parties has failed to do their duty for the other.
It's time to find ourselves a new tree.