Doesn't move any funds from mandatory into discretionary budget, except for block-grants to states
Doesn't wholly shut down any departments besides the U.S. Department of Commerce

1. Bring troops and military infrastructure home from overseas, dismantle military bases, and end the wars in Iraq and Afghanistan as soon as possible, reduce the military to its pre-Iraq-War size, draw down size of Navy and Air Force fleets, reduce nuclear arsenal, reduce military space spending, cancel or delay some weapons programs, eliminate all foreign aid, and cut 1/2 out of the total defense and military budget (saves $331 billion).

2. Abolish the National Intelligence Program, and cut 99% of the budget of the U.S. Department of Homeland Security (saves $107.5 billion).

3. Make no cuts to Veterans' Affairs programs, services to noncombat officers, the Army Corps of Engineers, and the Corporation for National and Community Service.

6. Make no cuts to the Smithsonian Institute, White House tours, and national monuments.

3. Oppose the Lincoln-Kyl, Clinton, and Obama proposals on expansions to the estate/death tax and the investment taxes; also oppose a bank tax.

3. Generate new revenue to fund Social Security and Medicare by subjecting some incomes above $106,000 to payroll taxes (generates $50 billion).

4. Cut 9% of the budget of the Department of Health and Human Services (saves $80.6 billion)

5. Clear mandatory spending obligations from the budget by block-granting family support programs and the Children's Health Insurance Program (CHIP) to control by the states (saves $330.5 billion).

2. Cut the budget of the Environmental Protection Agency by 30% (saves $3 billion)

3. Oppose the implementation of a tax on carbon emissions.

4. Cut the budget of the Department of the Interior by 50% (saves $6.75 billion), making no cuts to the National Park Service.

5. Cut the budget of the Department of Agriculture by 18% (saves $27.1 billion), making no cuts to farm subsidies.

6. Clear mandatory spending obligations from the budget by block-granting Food Stamps (SNAP) and the Child Nutrition Program to the states (saves $81.6 billion)

1. Cut 89% of the budget of the Department of Housing and Urban Development (saves $41.1 billion).

2. Cut 94% of the budget of the Department of Education (saves $67.7 billion), making no cuts to the Office of Drug Free Schools.

4. Cut 24% of the budget of the Department of Transportation (saves $24 billion). 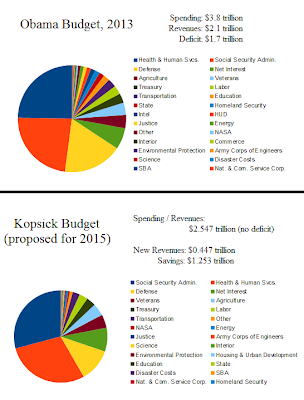