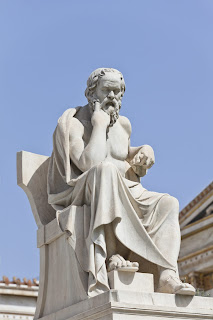 Mental and ethical traits such as intelligence and virtue are what make up a person’s character. Personality is a unique set of behavioral and emotional traits and shows in a person’s actions. Reputation is public knowledge and value of an individual. It is important to know the difference because they may not always reflect each other. A person may not always do as their conscience tells them. Here, personality does not reflect character. Reputation is based on others’ knowledge of an individual’s personality, which is subject to change.

Socrates is concerned with his accusers’ conceptions of character, personality, and reputation because he feels that some of the charges against him are based on his reputation among the citizens as an annoying man who has corrupted the youth. The so-called “crimes” of being a “curious person” and a “busybody” are more personality traits than tangible actions that are either just or unjust. Thus, they do not warrant government intervention or punishment. Socrates asks the jury to “concentrate your attention on whether what I say is just or not.” He tells Meletus, “You… have avoided my company and were unwilling to instruct me, but you bring me here, where the law requires one to bring those who are in need of punishment, not of instruction.” Socrates believes that his accusers were rash in their recommendation of punishment when a simple conversation would have been more enlightening to both parties. It is probable that the accusers would have been too annoyed by Socrates or threatened by his argumentative skill to confront him.

Socrates asks his hypothetical interlocutor, “…are you not ashamed of your eagerness to possess as much wealth, reputation and honours as possible, while you do not care for nor give thought to wisdom and truth, or the best possible state of your soul?” Socrates believes that when he examines the people he meets, he is fulfilling his “divine mission” as “a gift of the god to the city” to improve people’s souls by determining whether they have the wisdom they are reputed to have.

The Oracle revealed that there was nobody wiser than he, although he did not believe himself to be wise, so he was confronted with a paradox. He concluded that to begin any argument by admitting ignorance is to start from a neutral perspective so that he may be open to the many different possible truths, while using reason to discern what possibilities are false. Socrates accuses his accusers of lying, slandering him, contradicting themselves, and trying to deceive the jurors. He shows that Meletus contradicts himself in accusing Socrates of both atheism and believing in gods other than those endorsed by the state. He begins by making it clear that he is different from the depiction of him in Aristophanes’s play “The Clouds,” which helped give rise to his reputation as a person concerned with the sky.

Socrates also tells the jurors that they were influenced by that depiction at a young age and that it is unfair for that past event to have such a great influence on jurors’ opinions and he regrets that it is something he is unable to cross-examine. He reasons that if he were truly a corruptor of the youth, then the youth or their families would have brought charges against him instead of Meletus, Anytus, and Lycon. Socrates says, “Someone might say, ‘Are you not ashamed, Socrates, to have followed the kind of occupation that has led to your being now in danger of death?’” and proceeds to argue that there is greater shame in knowing what is virtuous and not doing it because of fear.

Heraclitus would characterize Socrates as a person with more potential for understanding than his accusers. Heraclitus says, “Much learning does not teach insight.” and “Men who are lovers of wisdom must be inquirers into many things indeed.” Socrates’s ability to admit he knows nothing enables him to consider whatever opinions he encounters, and argue against them not based on what he has been taught, but whether the opinion his interlocutor presents makes sense logically.

The mathematikoi is more similar to the Socratic method than the akousmatikoi because the akousmatikoi were more concerned with memorizing Pythagoras’s sayings and were not allowed to interpret, add to, or argue about them. The mathematikoi emphasized understanding and insight and were encouraged to think for themselves about the substance of what was being said. Like the mathematikoi, the Socratic method encourages deliberation instead of mere acceptance and memorization of unproven sayings.

The goal of the elenchus is to find logical contradictions in the interlocutor’s argument and to conduct the conversation in a way that exposes that contradiction. In this elenchus, Socrates is faced with two accusations that can be shown conflict with each other as long as he can prove Meletus believes a third thing about Socrates. Socrates is accused of believing in some false gods or spirits, but he is also accused of not believing in the city’s gods. Once Socrates can get Meletus to say that Socrates teaches the youth about spiritual things besides the gods that the state endorses, and also that Socrates is an atheist, then he can go about proving to Meletus, that he has contradicted himself, through a reductio ad absurdum. At the end of this, Socrates says, “Socrates is guilty of not believing in gods but believing in gods” and ridicules the statement.

Although at first glance it might appear that Socrates is leading Meletus into a trap, Socrates makes it clear that Meletus is among those making the accusations. So when Socrates leads Meletus to say that Socrates doesn’t believe in any gods at all, Meletus and the other accusers’ assertion has fallen through. Socrates has brought up a new accusation, but has disproved it and two other accusations simultaneously.

Originally Written in October or November 2007 as a college essay
Originally Published on October 24th, 2010