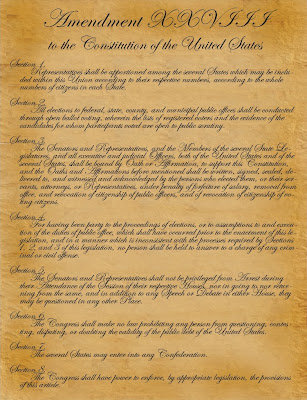 The following is a proposed amendment to the United States Constitution. Its purpose is to put into practice principles which were endorsed by Reconstruction-era author Lysander Spooner in his 1867 essay “No Treason”.

Section 1.
Representatives shall be apportioned among the several States which may be included within this Union according to their respective numbers, according to the whole numbers of citizens in each State.
Section 2.
All elections to federal, state, county, and municipal public offices shall be conducted through open ballot voting, wherein the evidence of the candidate or candidates for whom each participant in an election voted is open to public scrutiny.
Section 3.
The Senators and Representatives, and the Members of the several State Legislatures, and all executive and judicial Officers, both of the United States and of the several States, shall be bound by Oath or Affirmation, to support this Constitution, and the Oaths and Affirmations before mentioned shall be written, signed, sealed, delivered to, and witnessed and acknowledged by the persons who elected them, or their servants, attorneys, or Representatives, under penalty of forfeiture of salary, removal from office, and revocation of citizenship of public officers, and of revocation of citizenship of voting citizens.
Section 4.
For having been party to the proceedings of elections, or to assumptions to and execution of the duties of public office, which shall have occurred prior to the enactment of this legislation, and in a manner which is inconsistent with the processes required by Sections 1, 2, and 3 of this legislation, no person shall be held to answer to a charge of any criminal or civil offense.
Section 5.
The Senators and Representatives shall not be privileged from Arrest during their Attendance of the Session of their respective Houses, nor in going to nor returning from the same, and in addition to any Speech or Debate in either House, they may be questioned in any other Place.
Section 6.
The Congress shall make no law prohibiting any person from questioning, contesting, disputing, or doubting the validity of the public debt of the United States.
Section 7.
The several States may enter into any Confederation.
Section 8.
The Congress shall have power to enforce, by appropriate legislation, the provisions of this article.

In defense of Section 2 of my proposed legislation:
In "No Treason", Lysander Spooner wrote the following on the subject of voting:
"No man can reasonably or legally be said to do such thing as assent to, or support, the Constitution, unless he does it openly and in a way to make him personally responsible for the acts of his agents, so long as they act within the limits of the power he delegates to them...
"[T]he general fact that our government is practically carried on by means of [secret ballot] voting, only proves that there is among us a secret band of robbers, tyrants, and murderers, whose purpose is to rob, enslave, and... murder, the rest of the people...
"[Secret ballot] voting furnishes no legal evidence as to who the particular individuals are (if there are any), who voluntarily support the Constitution. It therefore furnishes no legal evidence that anybody supports it voluntarily. So far, therefore, as [secret ballot] voting is concerned, the Constitution, legally speaking, has no supporters at all."
“On general principles of law and reason, the oaths which the pretended agents of the people take [‘]to support the Constitution,[’] are of no validity or obligation… [because] …they are given to nobody. There is no privity (as the lawyers say) – that is, no mutual recognition, consent, and agreement – between those who take these oaths, and any other persons.
“…[S]ay that, among… persons, in whose presence the oath was taken, there were [a given number of persons], who had secretly – by secret ballot, and in a way to avoid making themselves individually known to me, or to the remainder of the [people] – designated me as their agent to rule, control, plunder, and, if need be, murder these… people.
“The fact that they had designated me secretly, and in a manner to prevent my knowing them individually, prevents all privity between them and me; and consequently makes it impossible that there can be any contract, or pledge of faith, on my part towards them; for it is impossible that I can pledge my faith, in any legal sense, to a man whom I neither know, nor have any means of knowing, individually.”
Spooner criticizes secret-ballot voting by invoking the term “privity” (meaning a legally-recognized relation between two parties, such as that of service) as preferable to and distinct from “privacy” (meaning the state or condition of being free from public attention).
It is precisely this freedom from public attention which is embodied in the practice of secret-ballot voting that makes that system of voting antithetical to the idea that government processes should be open to the public, and to its scrutiny.
This is because any defense of the secret-ballot system which invokes the necessity of defending individual “privacy” rather than “privity” undermines the openness of the legitimate, voluntary social contract, whereby people make themselves individually known to one another, and the decisions which they make in the public sphere known to one another (or, at least, potentially so).
In topics pertaining to the administration of public policy (particularly in regards to elections whereby authority is delegated), the term “privacy” is, practically, synonymous with the term “secrecy”, as has been (in some cases) the term “independence”.
It is for these reasons that I contend that Section 2 of my proposed legislation, which mandates that "[a]ll elections to federal, state, county, and municipal public offices shall be conducted through open ballot voting, wherein the evidence of the candidate or candidates for whom each participant in an election voted is open to public scrutiny”, would – as Spooner prescribed – provide for the furnishment of legal evidence that certain individuals voluntarily support the Constitution, and that it would also make individuals personally responsible for the acts of their agents, so long as such agents act within the limits of the power delegated to them.

In defense of Section 5 of my proposed legislation:
In "No Treason", Spooner wrote the following on the subject of the questioning of federal public officials:
"...[B]y the Constitution... the properties, liberties, and lives of the entire people of the United States are surrendered unreservedly into the hands of men who... shall never be [‘]questioned[‘] as to any disposal they make of them.
"...Thus the Constitution (Art. I, Sec. 6) provides that, '[f]or any speech or debate [or vote,] in either house, they [the senators and representatives] shall not be questioned in any other place.[']... this provision protects them from all responsibilities for the laws they make.
"...The Constitution also enables them to secure the execution of all their laws, by giving them power to withhold the salaries of, and to impeach and remove, all judicial and executive officers, who refuse to execute them.
"Thus the whole power of the government is in their hands, and they are made utterly irresponsible for the use they make of it. What is this but absolute, irresponsible power?... they shall never be [']questioned,[']... for violating their oaths... The right of absolute and irresponsible dominion is the right of property... The two are identical... they own us as property... they are our masters, their will is our law."
It is for these reasons that I contend that Section 5 of my proposed legislation, which mandates that “[t]he Senators and Representatives shall not be privileged from Arrest during their Attendance of the Session of their respective Houses, nor in going to nor returning from the same, and in addition to any Speech or Debate in either House, they may be questioned in any other Place” – which would amend Article I, Section 6, Clause 1 of the United States Constitution, and also invalidate a portion of it – would, as Spooner prescribed, permit the senators and representatives to be questioned; which is to say that – just as the senators and representatives may withhold the salaries of, impeach, and remove from office judicial and executive officers – senators and representatives would be subject to the same type of "questioning" which I have just described, but by their electors – i.e., the people who voted in the elections which they won – rather than by the executive and judicial branches of government.
Additionally, I would note that such "questioning" of senators and representatives could take place immediately upon refusal of any such public official to sign a written oath in support of the Constitution, and – in pursuance of Section 3 of my proposed legislation – such “questioning” would be administered in the form of “forfeiture of salary, removal from office, and revocation of citizenship” of the offending public officer.

While I can only hope that this defense of my proposed legislation will be sufficiently satisfactory to the citizens of the United States in general, and the followers of Lysander Spooner especially, I believe that unless and until this bill is passed, enacted, and enforced, the legitimacy of American government, the transparency, responsibility and accountability of the action of its agencies and its officers, and the liberty of its subjects, will remain a usurpative delusion which flies in the face of common law, contract law, and the freedom of association.

SECTION 2
Permit the public scrutiny of the evidence of voting results for elections of candidates in all jurisdictions.

SECTION 3
Require that the oaths of public officials to support the Constitution be written, signed, sealed, delivered, witnesses, and acknowledged
[Extrapolating the contract-law-relevant English Act for Prevention of Frauds and Perjuries as applicable to U.S. common law; amending Article VI, Clause 3 of the U.S. Constitution].

SECTION 4
Immunize public officials from criminal and civil prosecution for having governed without written evidence of having been elected and having signed an oath to support the Constitution.

SECTION 6
Legalize the questioning of the validity of the public debt
[Invalidating Section 4 of Amendment XIV to the U.S. Constitution].

SECTION 7
Permit the States to enter into confederations
[Invalidating a portion of Article I, Section 10, Clause 1 of the U.S. Constitution].

SECTION 8
Empower the Congress to enforce the provisions of this article by appropriate legislation.