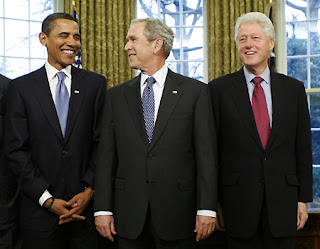 President Obama and (evidently) new co-President Bill Clinton recently conceded to Republicans that they and many Democrats are willing to accept a plan to temporarily (i.e., for the period of the next two years) extend the Bush tax cuts to not only the wealthy but to all Americans (leading to higher taxes for those individuals who earn less than $20,000 and families who earn less than $40,000, due to the amount of tax savings they will lose from the Making Work Pay credit). Advocates on the right claim that extending the tax cuts to the rich especially will help finance the creation of jobs in the private sector.
But Obama and many Democrats have decided that they would accept the tax-cut extension on the condition that Republicans agree a compromise which would allow the preservation of the extension of unemployment benefits for just over a year. So far, so good, both ideas simply preserve the status quo. But hold on...
Some Democrats are even going so far as to say that the federal government should extend up to several months of benefits to those who are coming to the end of their one-and-a-half-year federal benefit periods, which they began after they exhausted six months of state benefits. This plan is not likely to be included in the deal.
It should be obvious that you can't expect to solve unemployment by keeping taxes for the wealthy low with the intended effect of aid private-sector job creation without giving the unemployed incentive to find employment, i.e., by, at the very least, refusing to extend benefits further, or, additionally, by shortening the periods of time for which people may receive such benefits.
Any move to address unemployment by extending tax cuts to the wealthy in order to finance the creation of jobs cannot work unless unemployment is at least not extended further. If you believe that the failure of the Bush tax cuts to create jobs in the last 7 to 9 years is not a significant factor in creating and / or prolonging and / or deepening the recession, and you additionally believe that keeping things the same will only stagnate the economy, you must support some form of unemployment benefit reduction.
I think it's obvious that preserving things the way they are is not working. And the way the last several working days of this congressional session are going, more of exactly the same is just what we are going to get. This will likely lead to economic stagnation.
It is not that the government is doing nothing and that that is what's keeping the recession going. And it's not that the government is doing too much and that that is what's keeping the recession going. It's not even necessarily that the parties and the government as a whole are being inconsistent. It's that the parties and the government as a whole are being consistently inconsistent.
The government is undertaking deals that will keep the left-vs.-right, Democrat-vs.-Republican, liberal-vs.-conservative cat-and-mouse game going. They want to make everything they can into an issue of economics so that they can rightfully continue to blame one another for failing to jump-start the economy, so that they may keep their own well-seasoned, well-connected, experienced politicians in charge of their respective parties, and so that the new and alternative viewpoints within the parties will never get the opportunity to be heard or considered.

If this taxation and unemployment plan goes forth as it appears it will, it will fail, just as any compromise that takes a leftist stand on one of the issues while taking a rightist stand on the other will fail. One half of the plan will always destroy the effects of the other. The only reason both parties seem so willing to compromise on this plan is because they are trying to purposely undermine their own agenda in order to improve their own clout.
When the plan does not work, Democrats will say it is the Republicans' fault because we didn't raise taxes on the rich, and now we have that much less money for more stimulus. When the plan does not work, Republicans will say it is the Democrats' fault because maintaining and / or further extending unemployment will undermine the point of extending tax cuts to the rich, which was to finance the creation of jobs.

In other words, we're trying to fix the economy by:
1. Continuing to pay people not to work, and even considering prolonging the period for which we do so.
2. Effectively raising taxes for the poorest Americans, potentially causing more people to become dependent on the government for social welfare benefit checks.
3. Letting their would-be employers keep capital to pay new employees' wages, which, due to failure to properly incentivize potential labor, would cause that capital to go unspent.

The people who the so-called "99ers" (as in 99 weeks) want to help first exhausted their six months of state benefits, and then used up their one-and-a-half-year federal benefits, and now they want several additional months of additional benefits because they have bills and can't make their payments. Is it really that unfair to ask "when does it end?"
I just don't get why, in this time when the gap between rich and poor is widening so significantly, we are focusing on helping the people who already have their shit together well enough to have bills to pay in the first place, or to even consider trying to apply for jobs.
Plenty of these people can do fine for themselves if you just remove a little incentive not to do so. I would never call people who receive unemployment checks lazy, they're some of the hardest-working people in our society (but, of course, only when they are indeed working).
I survive on $315 a week. I'm fairly confident I could survive comfortably on $290 per week if I had to, and I would expect that any news about my benefits being extended wouldn't have any effect on whether or how hard I would look for a job.
People who have their shit together enough to be able to file the paperwork necessary to get unemployment checks and prove they've been looking for a job are not "the poor." People who can barely read or write; have drug addictions and / or mental disorders; don't have any clean clothes; have little or no practical marketable labor skills; don't have residences, mailing addresses, or consistent access to phones or internet; don't speak English very well yet; and / or have to rely on the mercy of their friends with houses and on the kindness of strangers: THESE people are the ones who are needy. They don't have bills to pay. For all intents and purposes, they don't even exist.
Why does the government want to limit the amount people are able to deduct from their taxes for charitable contributions? Is it because we have a deficit to fix, or is it because the government wants to attain a monopoly over legitimate charity? The government imposes gift taxes and death (estate) taxes, so why isn't it taking eight cents out of every quarter I give to a bum?
There's a great scene in the movie "Network," in which the TV network has decided to make a series about the bank-robbing and kidnapping activities of a group of left-wing Black-Panther types, using real footage of the crimes. Their leader is a black guy with a huge gun. He sits in his basement lair, watching his minions and the white corporate-network staff members bicker over the monetary terms of the contract negotiation. In the middle of it all, the leader stands up, fires the gun at the ceiling, everyone stops talking and looks at him, and he starts talking about percentages and spouts all kinds of incomprehensible contract jargon.
Progressivism can only progress when citizens stop letting politicians make us see income distribution solely through the lens of whom is paying taxes, because all most politicians really care about is where their money is coming from, and who is generating it. The people who don't generate any money don't matter.

Post-Script:
My argument would hold less water were it true that the vast majority of those rich people would save their money instead of spend it creating jobs. I guess there would only be one way to find out, and obviously there's a matter of risk involved. Also, we don't know whether or how long the 99ers' benefits may continue to be extended.