Health Care and Health Insurance: Where Libertarians and Progressives Can Agree

Written in Coordination with Annie Dean

1. Constitutionality of Federal Involvement in Health
2. Health Care vs. Health Insurance, and the Individual Mandate
3. Single-Payer Universal Plans, and Employers and the States
4. Taxes, Medical Device Sales, and Lawsuits
5. Taxes and Profits

1. Constitutionality of Federal Involvement in Health

It is unnecessary to pass a constitutional amendment specifically authorizing the existence of the Department of Health and Human Services (H.H.S.). The department is constitutional, and so is federal involvement in health policy in general, despite the fact that health is not a specifically enumerated duty of the federal government among the eighteen powers outlined in Article I, Section 8 of the U.S. Constitution.
The predecessor of the H.H.S. – the Department of Health, Education, and Welfare (H.E.W.; which existed from 1953 to 1980) – is therefore constitutional. This is because President Eisenhower’s “Reorganization Plan Number 1 of 1953” – which established the H.E.W. (which was the only department to be created through presidential reorganization authority) – was not unconstitutional.
The reasons for this are that: 1) nothing in the Constitution specifically allows, nor forbids, presidential executive orders; 2) the congressional Reorganization Act of 1939 gave the president the authority to reorganize the executive branch; 3) legislative vetoes which would have prevented Eisenhower’s reorganization plan were not attempted at the time, and such vetoes were ruled unconstitutional by the Supreme Court in 1983; and 4) federal departments may not be abolished without an Act of Congress, so any executive orders attempting to abolish the H.H.S. would be unconstitutional. Reason #3 is likely the strongest argument supporting the H.H.S.’s constitutionality.

2. Health Care vs. Health Insurance, and the Individual Mandate

In order to ensure that doctors continue to abide by the Hippocratic Oath they took – requiring them to provide care to patients regardless of their ability to pay for such services – hospitals should hold doctors accountable to their oaths. Any doctor refusing to provide free-of-cost care to patients should be put on unpaid leave for several months, and the offense should be noted in their permanent record.
The federal government does, and shall, have the authority to enforce these obligations, if and when states impair the obligation of such contractual oaths into which doctors enter. To ensure such obligations would help ensure universal care, thus rendering the health insurance industry obsolete. This is because health insurance coverage would not be necessary in order to receive care. This is one of the reasons why the individual insurance purchase mandate (established by the Patient Protection and Affordable Care Act; i.e., Obamacare) is unnecessary.
Additional reasons why the individual mandate is harmful, include: 1) concerns relating to premium costs, 2) objections to involuntary servitude through coerced purchase, and the differences between 3) a tax and a penalty, and between 4) the commercial activity of purchase, versus the non-commercial inaction of refraining from purchasing. For all the foregoing reasons, the individual insurance mandate portion of Obamacare should be repealed by the Congress or overturned by the Supreme Court.

3. Single-Payer Universal Plans, and Employers and the States

There are numerous additional reasons why the costs of health care and insurance are so high. These reasons include: 1) the high costs of medical devices, 2) the taxation of hospitals and their employees, and 3) medical malpractice lawsuits.
Regarding 1) the high costs of medical devices: medical devices are expensive because profits on medical device sales are taxed, and also because sales of medical devices are taxed before profits can be calculated. Sale is productive behavior, which should not be taxed, in order to avoid discouraging such productive behavior so that the seller may avoid the tax. The reaping of profits on medical device sales could be argued as the same type of productive behavior, although this is more difficult to argue. Either way, taxes on the sales of medical devices should certainly not be taxed, as this is likely to decrease the sale and purchase of medical devices.
Regarding 2) the taxation of hospitals and their employees: the corporate income of hospitals, and the income deriving from hospitals’ sales, should not be taxed. Nor should the personal income of the employees of hospitals, such as doctors, nurses, and other staff. This is because working to earn income is a productive behavior, and so is the sale of health care, and so are corporate investments made by hospitals. The income, sales, and investment of hospitals and their staff should not be taxed, so as not to effectually discourage workers from working to earn income, nor discourage hospitals from selling and making investments in order to earn income. Otherwise, such taxation is likely to cause decreases in employment and hospital profitability, thus decreasing the availability of care.
Regarding 3) medical malpractice lawsuits: tort reform legislation that limits the awards which doctors and hospitals may be required to pay to patients who become victims of medical malpractice in civil suits, should not be passed, and where it exists, it should be repealed. This is because tort reform limits the powers of juries, which are supposed to have the ability to decide both the facts of the case and the appropriateness of the law, and make judgments regarding what compensation is appropriate. Although passing tort reform would cause hospitals to incur increased costs, thus reducing their capacity to provide treatment, these costs would be off-set through the reduction in taxes on hospitals’ sales, investments, and staff income.
Additionally, other negative effects of refraining from passing tort reform would be off-set because of the following reasons. The fact that eliminating taxes on profits from medical device sales, and eliminating taxes on the sale of medical devices itself, would have the effect of lowering the costs incurred by hospitals in acquiring such devices. Additional effects of this include decreases in the costs of using such devices which are incurred by patients, and increased access to medical devices.
Thus, since medical devices would be more easily affordable, doctors and hospitals would be less likely to neglect to purchase such devices. This would diminish the chances that patients would file medical malpractice lawsuits against doctors or hospitals, charging them with failing to use the most up-to-date and technologically advanced medical devices, in order to make correct diagnoses of their illnesses. Thus, hospitals would lose less money in lawsuits, and have more money and resources to invest in treating patients, and additionally the costs of health insurance would decrease as a result of the decreased cost of treatment.

Each hospital should be allowed to decide for itself whether to operate as a for-profit, not-for-profit, or non-profit institution. Currently, about 60% of hospitals are tax-exempt not-for-profit institutions, and as such, they are supposed to treat low- and moderate- income individuals and families, and patients lacking coverage.
The Patient Protection and Affordable Care Act requires hospitals to operate on for-profit bases, which causes them to lose their status as not-for-profit institutions. This makes them subject to taxation, and thus, subject to federal regulations, while also becoming eligible for subsidies and tax credits.
All hospitals ought to be free to operate on tax-exempt, not-for-profit, charity bases; and all hospitals should be free to allow doctors to provide free treatment and care, as well as discounted treatment and care, and pay in installations, for low- and moderate- income individual patients and families. Again, decreased cost of care will help achieve reduced cost of health insurance premiums.
While it may result in increased profitability for a hospital to receive government subsidies and tax credits, providing tax credits to not-for-profit, non-profit, and charity based hospitals would be impossible. Tax credits would therefore seem less necessary to hospitals, if they have the choice to avoid taxation by operating as non-profit institutions.
Additionally, subsidies would seem less necessary, due to the cost reductions which all the aforementioned reforms would bring about. Namely, 1) the elimination of taxation of the personal income of hospital staff, and 2) the elimination of taxation of profits on sales of medical devices; in addition to 3) the cost reductions which hospitals would see by avoiding having to pay for medical devices whose sellers raise their prices in order to offset the burden of taxes on device sales and profits.
Posted by AquarianAgrarian at 10:14 PM 1 comment:

Government is the Source of Corporate Privilege 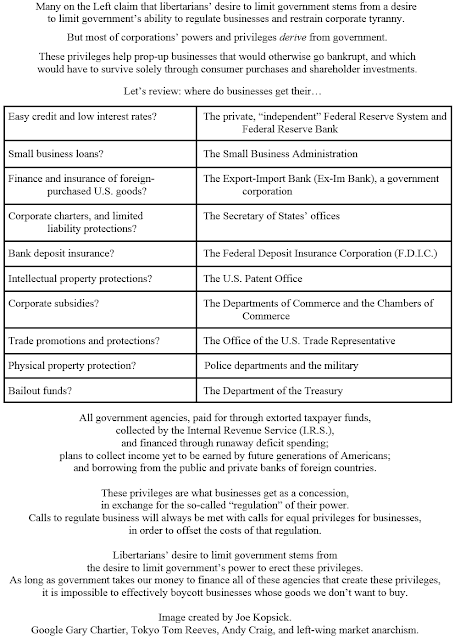 Posted by AquarianAgrarian at 8:11 PM No comments: