Is It Comparable to Slavery?

Posted by AquarianAgrarian at 6:49 PM No comments:

Categories of Goods: Rivalry and Excludability 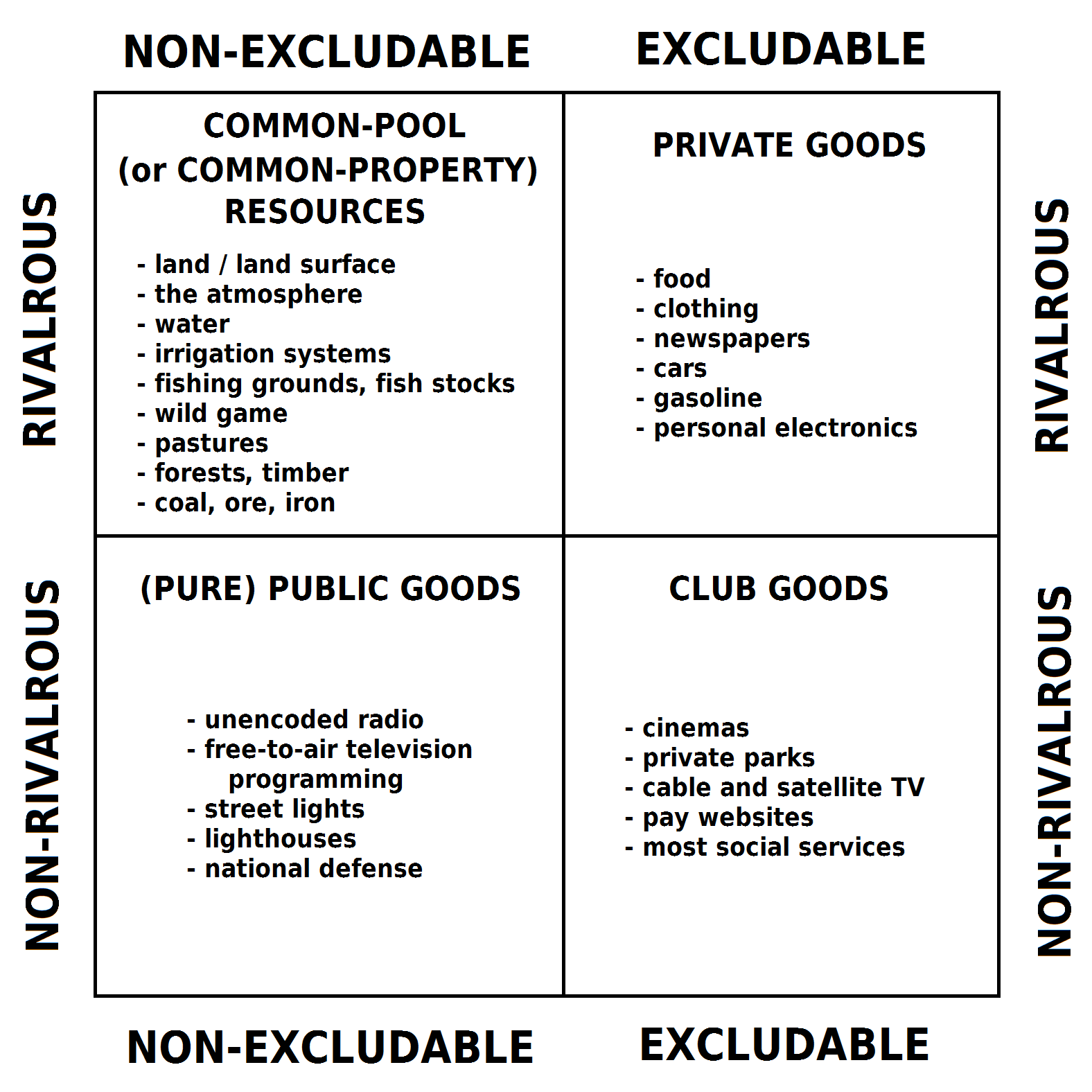 In order to ensure the widest possible distribution of the basic elements of nature and of life to all, we must revive the Commons. We must ensure common, shared, and fair and equal access to the basic elements of nature (land, water, and air) and the creatures and environmental processes which fuel and are fueled by them (wild game, fishing, irrigation, agriculture and pastures, forestry and timber, and mineral resources). The Commons and the people must not exclude anyone from accessing these resources, and the Commons should be free to punish those who attempt to exclude others from them.

In order to ensure the widest possible distribution of personally possessed tradeable goods, we must perfect the Private Sector. We must perfect and complete the Private system of market-oriented distribution, in order to leave markets for finished capital goods which are possessed personally (food, clothing, cars, gasoline, newspapers, and electronics). We must ensure that these goods are treated as personal possessions, and never re-appropriated or confiscated on the false premise that they are private property in the means of production.

In order to ensure the widest possible distribution of goods obtained by groups through compensated access, we must perfect the Club Sector. We must ensure that pay websites exist alongside the open internet, and that pay-per-view cable and satellite television exist alongside broadcast networks. Cinemas are to be treated as club goods. Social services and parks are to be treated as Club goods, rather than Public goods. Clubs must be free to set reasonable membership and use fees, and free to exclude and penalize attempts to free-ride.

In order to ensure the widest possible distribution of goods obtained by groups, we must perfect and purify the Public Sector. We must ensure that the open-access, peer-to-peer internet does not become subsumed by for-pay websites, and likewise that pay-per-view television does not take over all television broadcasting. Radio, broadcast television, and the open internet should be regulated in an open and transparent manner - by a government of, by, and for the people. - and provided voluntarily through charitable giving and labor. The same goes for national defense, and operation of lighthouses and street lights. The Public Sector must not attempt to exclude anyone from accessing these resources, and remain free to punish anyone who attempts to exclude others from them.


Thanks to Peter Bjorn Hansen for his assistance.
Posted by AquarianAgrarian at 3:01 PM No comments: 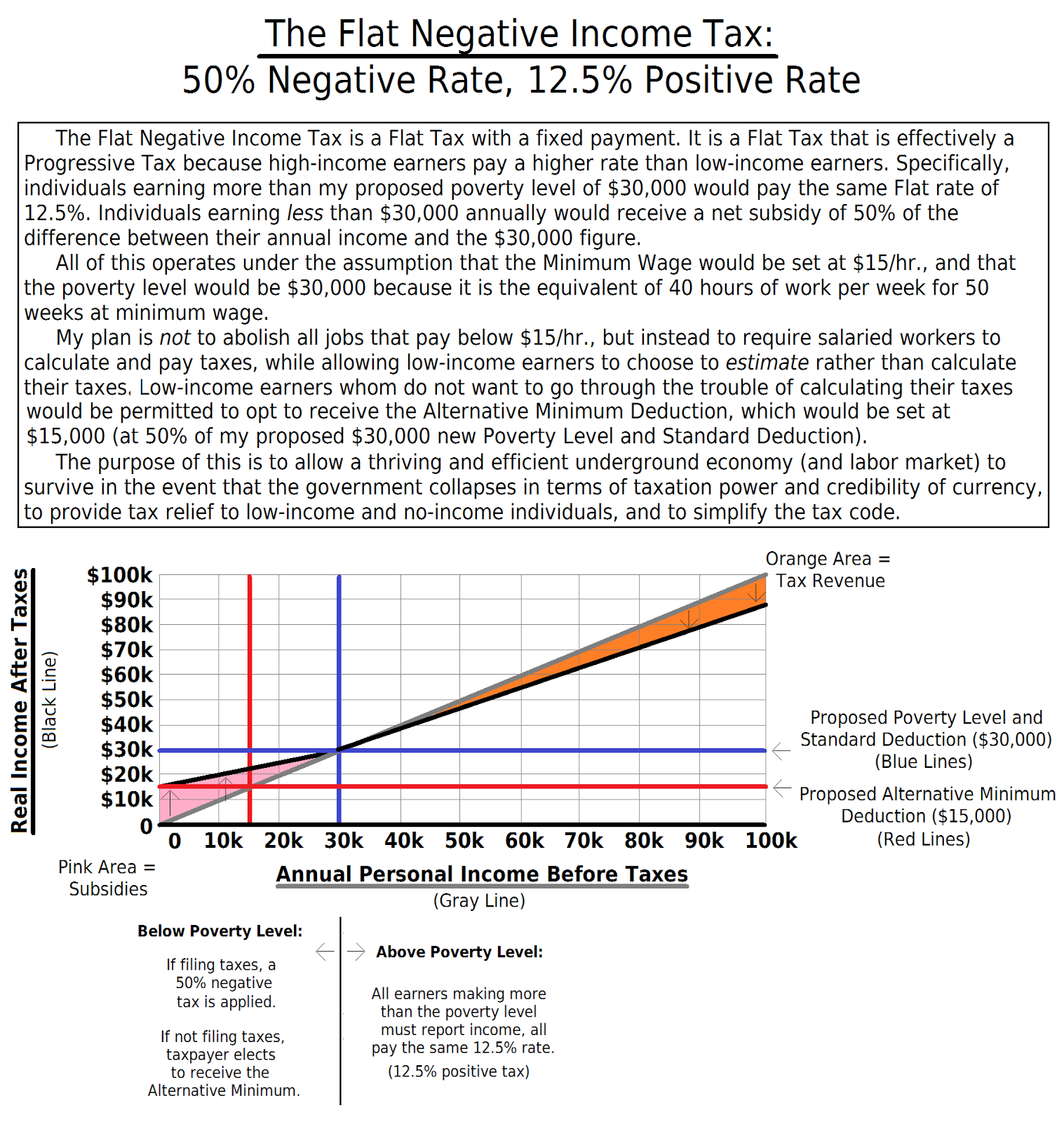 Posted by AquarianAgrarian at 1:54 PM No comments: 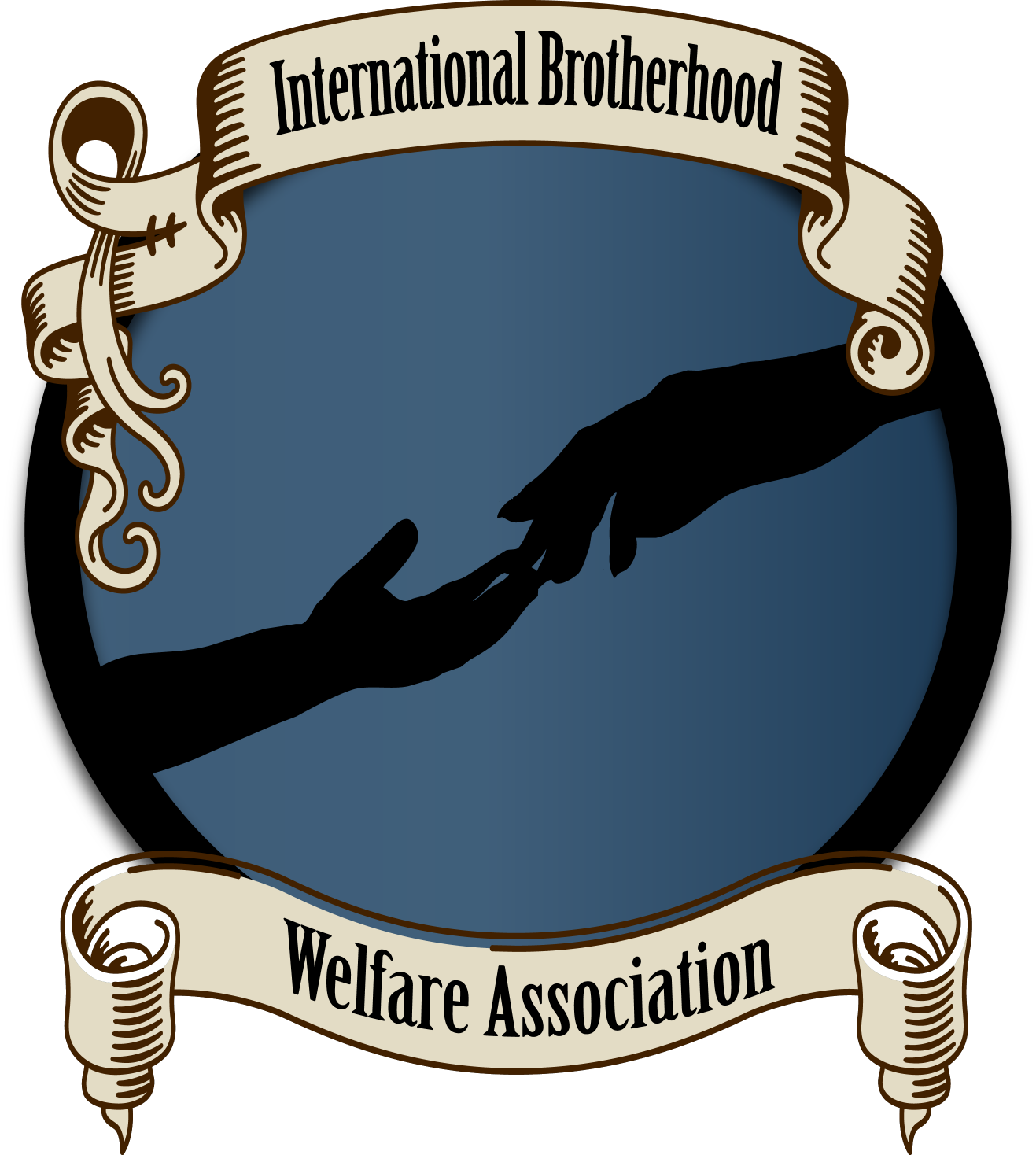 The International Brotherhood Welfare Association (I.B.W.A.) was a mutual aid society for traveling workers (commonly referred to as “hoboes”) which existed from 1905 to the early- to mid- 1920s.
It was less radical and less numerous than the Industrial Workers of the World (I.W.W.; the Wobblies), the largest union in America before the rise of the American Federation of Labor (later the A.F.L.-C.I.O.). Although the I.B.W.A. was supportive of the I.W.W., they remained separate, and the I.B.W.A. survived multiple failed attempts by the I.W.W. to take it over.
In 1907, founder James Eads How, the “Millionaire Hobo”, told the New York Times that he wanted to make hoboes “not only better citizens, but better 'hoboes', and I want the public to appreciate what the 'beat' is, what his rights are, and how he should be looked upon.”

Centered in the Midwest United States, the I.B.W.A. had a presence in about twenty cities. I.B.W.A. centers, called “hobo colleges”, were meeting places that offered hot meals, shelter, and education. These centers "graduated" hoboes.
Subjects covered at these “colleges” ranged from philosophy to literature to religion, with lectures given by street orators and academics alike; as well as social science, industrial law, vagrancy laws, public speaking, job searching, the eight-hour work-day, pensions, unemployment, and disease awareness.
According to sociologist Nels Anderson, the goals of the I.B.W.A. were to “bring together the unorganized workers … co-operate with persons and organizations who desire to better social conditions … utilize unused land and machinery in order to provide work for the unemployed … furnish medical, legal, and other aid to its members … organize the unorganized and assist them in obtaining work at remunerative wages and transportation when required … educate the public mind to the right of collective ownership in production and distribution … [and] bring about the scientific, industrial, intellectual, moral and spiritual development of the masses”.

In the interest of raising awareness of (and promoting solutions to) homelessness – and in the interest of ameliorating the problems of temporary homelessness, unemployment, income disparity, lack of education, lack of marketable skills, and lack of knowledge about legal rights on the job site – I would urge Portland Rescue Mission, Transition Projects Inc., Right 2 Dream Too, and other homeless charities to look into continuing to expand the variety of the services which they provide, or at least to consult with other local homeless charities which could be better equipped to provide the space necessary to hold large events.
Imagine homeless people gathered under one roof – not just to eat, sleep, find housing and work opportunities, and to receive religious ministry (as they do at the Portland Rescue Mission), and not only to do laundry and to get lockers and IDs (as they do at Transition Projects, Inc.) – but in order to do all of the above, in addition to learning about how to survive in Portland, the local job scene, and local social services.
Imagine professors of labor law, representatives from unions such as the I.W.W. and the S.E.I.U. (Service Employees International Union), labor rights advocacy organizations such as Portland Solidarity Network and local affiliates of O.S.H.A. (the Occupational Safety and Health Administration), and staffing and consulting agencies and members of green and sustainable business alliances, teaching homeless people about workers' rights and how to get jobs in the area, and teaching them marketable skills. Imagine professors of philosophy, literature, theology, and law at Portland State University or Portland Community College teaching homeless people such advanced knowledge.
Imagine Food Not Bombs coordinating with local food banks to help homeless people find donated food around the city more easily. Imagine an issue of Street Roots that contains a map and time schedule of free meals, that anyone can go to simply by looking up the day of the week and the time.
Lastly, imagine putting the able-bodied homeless and unemployed back to work restoring and beautifying the urban environment, by coordinating activity between landscaping companies, staffing agencies, homeless charities, green and sustainable business alliances, community land trusts, community gardening groups, college urban farming apprenticeship programs, the Master Recycler Program, and groups for the elderly and veterans (such as retirement communities; fraternal orders and lodges; and local affiliates of A.A.R.P., the Veterans' Administration, and Veterans for Peace).

A revived mutual aid society like the one I am proposing should promote the idea of a “hobo” as a traveling worker, and remind people that all working people travel; hence the need for services like The Portland Loo downtown, accessible to all people, regardless of whether they're experiencing homelessness.
It is essential to get people to realize that homelessness can happen to them. Anyone can become homeless overnight, and from a distance it is difficult to even tell the difference between the working poor and the non-working poor. It is time for charity organizations in Portland to set the national standard for helping the poor; reviving the I.B.W.A., and improving coordination across agencies that provide different types of services to the homeless and poor.


The various homeless charities in Portland should give homeless people the same opportunities that people in prison have: the opportunity to learn marketable job skills, and even to earn a degree. Billboards around the city urging an end to “petlessness” and “plant homelessness” only contribute to distraction from (and commercialization of) the homelessness issue, and to the public perception of the homeless as animals and non-native invasive species (which is apparent in the way pets and plants are advertised around the city).

See also the following links on the history of the I.B.W.A.:

Minimum Wage Recommendations for Each State 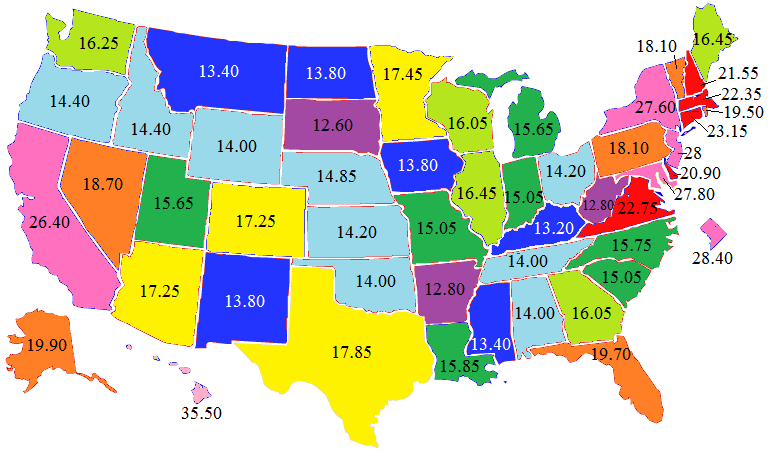 Statistics estimated, estimates based on
statistics from the H.U.D. and the Bureau of Labor Statistics
(number of minimum wage hours worked per week
necessary to afford to rent a two-bedroom apartment
and spending 30% of monthly income on rent)

Posted by AquarianAgrarian at 6:32 PM No comments:

Joe Kopsick for Congress in 2014 (OR-3) Campaign Flyers 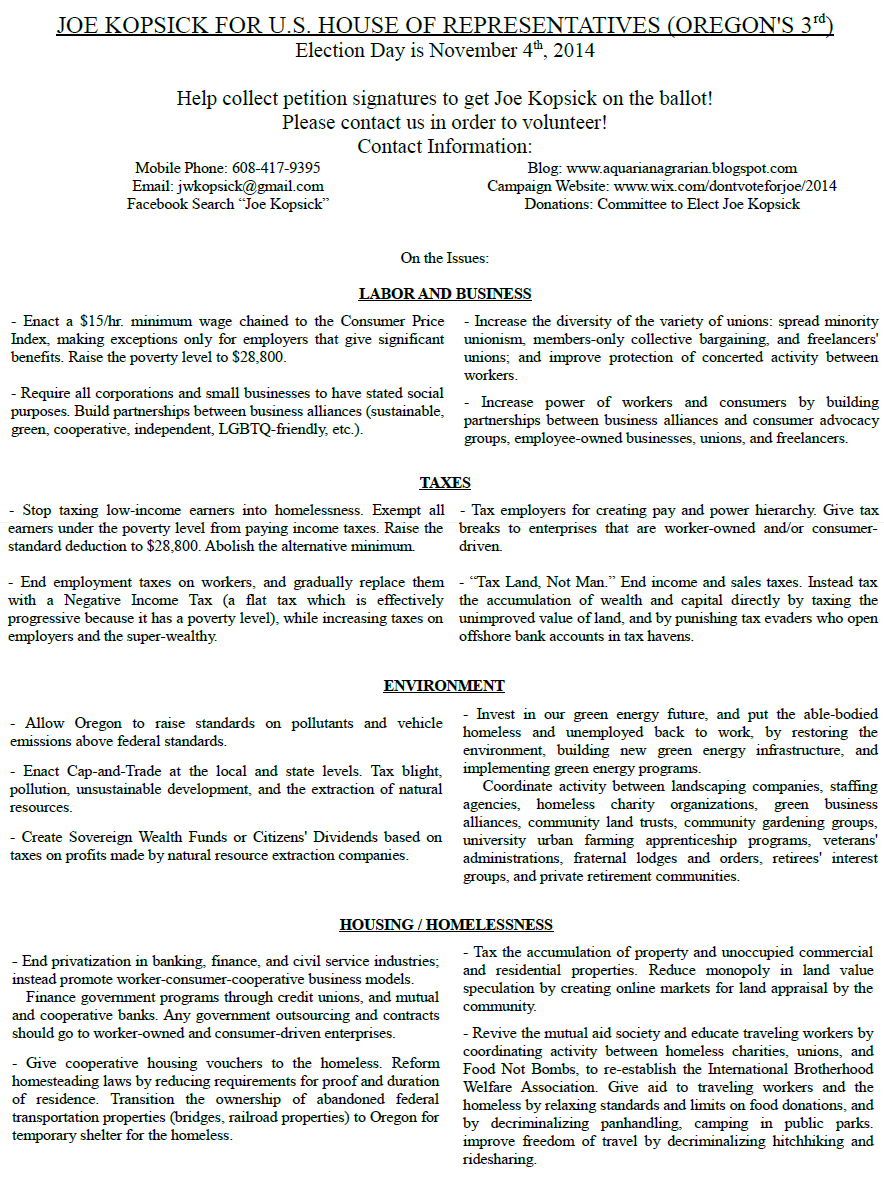 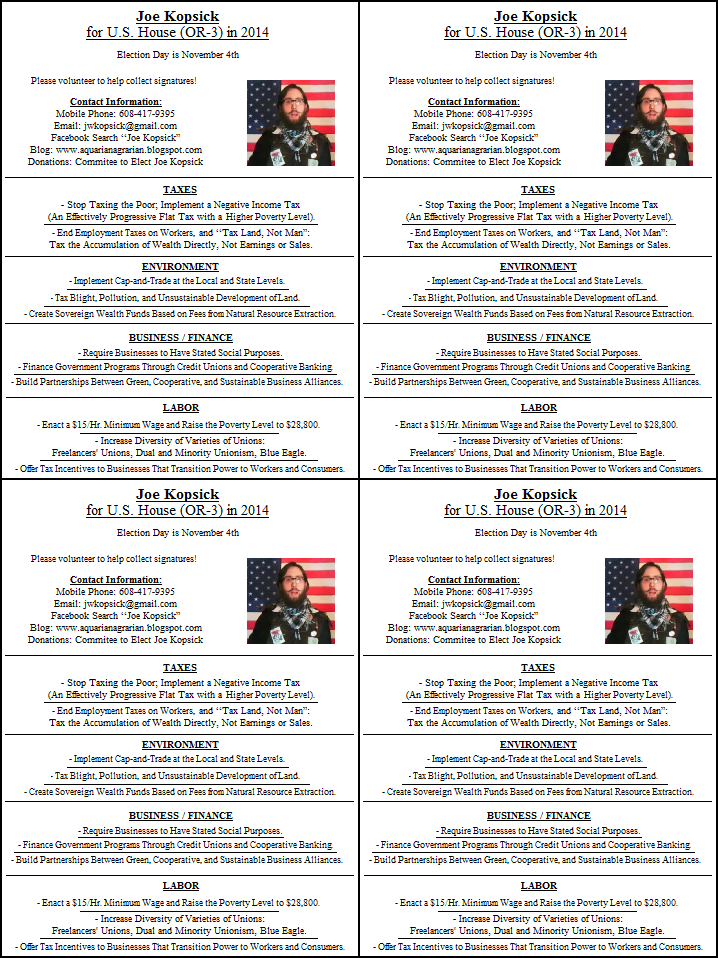 Posted by AquarianAgrarian at 4:23 PM No comments:

The Political Spectrum of Symbols: The Piano Model 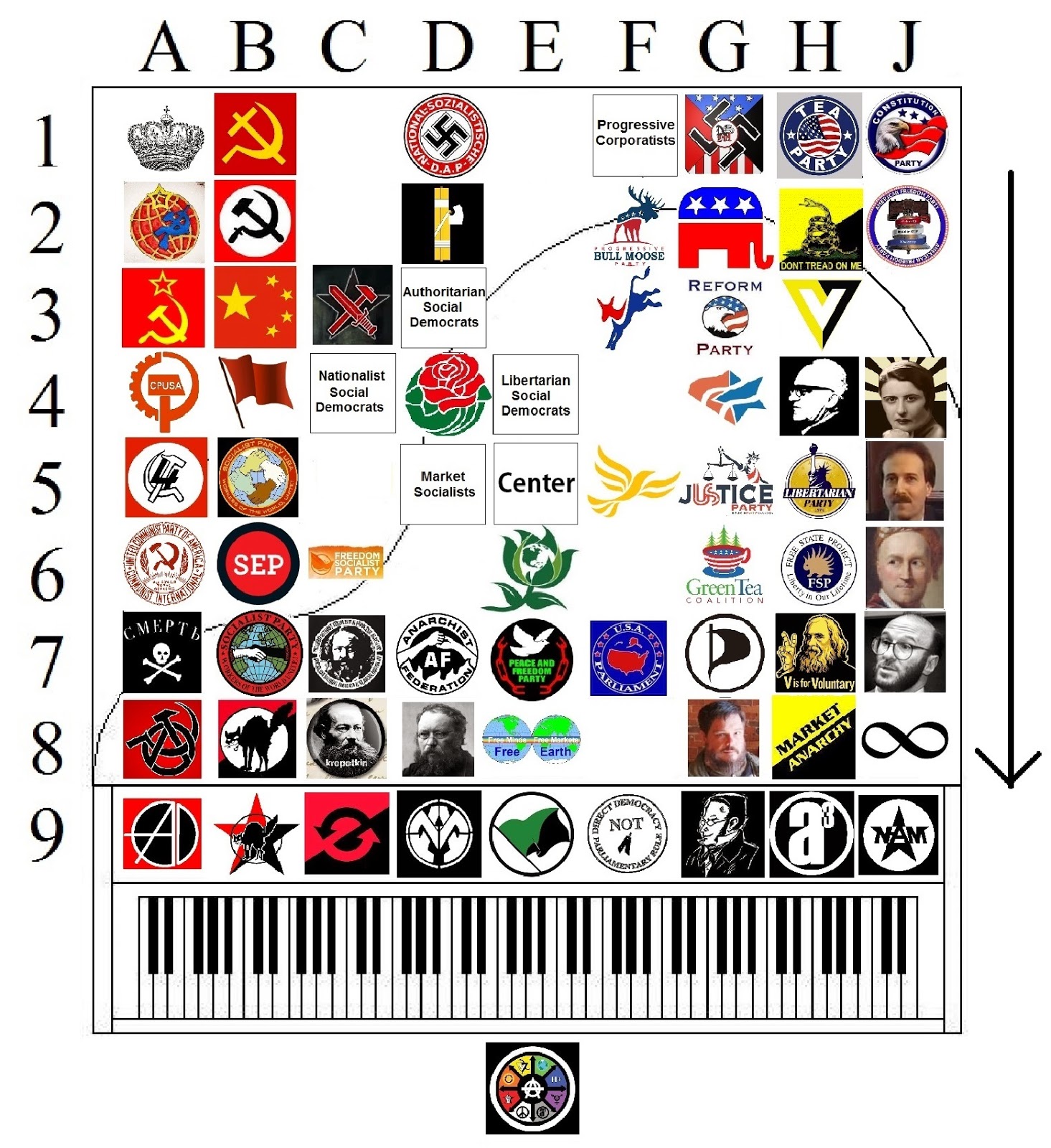